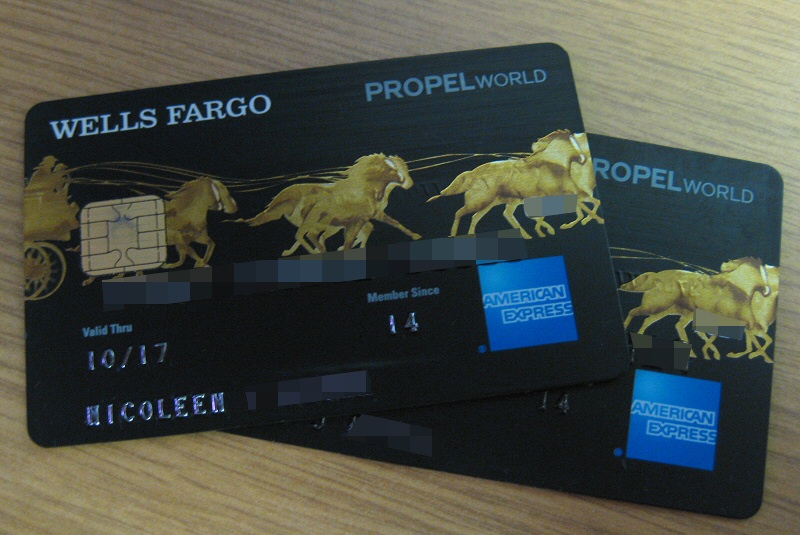 Wells Fargo’s Propel World and Propel 365 cards have received relatively little attention on the card blogs.  The Propel World is worth potentially $630 in bonuses alone.  The card has a pretty stiff annual fee, and some people have reported trouble getting approved if they don’t have any relationship with Wells Fargo.  But I think the biggest reason this card is underplayed on the major card blogs is that there doesn’t seem to be any card application referral links.  Ok, so that’s a bit cynical, but it might have some truth to it.

After hitting the bonus spend you’ll have at least 43,000 points.  Some flyertalk users report waiting over 2 months for the bonus points to post to their accounts.  Unfortunately (or fortunately, if you don’t enjoy maximizing complex redemption schemes) the best way I found to spend the points is to simply take the cash.  Points can be redeemed for $0.01/pt in $25 increments so 43,000 points are worth $425.  You have the choice of taking the cash as a statement credit or having it transferred to your Wells Fargo bank account. 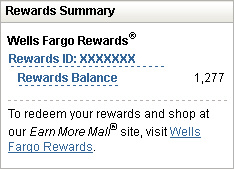 Points leftover after redeeming for cash (i.e. any balance less than 2,500 pts) aren’t casualties of war as I thought they would be.  Some helpful folks at the flyerfalk forum on this card brought up the fact that you can buy gift cards with any combination of points and dollars.  In my example I bought a $25 Subway gift card for 1,277 points and $12.23.  Since I would have spent $25 at Subway eventually anyway, I view the points used as basically being converted to cash.

Besides having no foreign transaction fee and a few other minor travel perks, the Propel World’s most valuable benefit is the incidental airline expense reimbursement.  The card will reimburse up to $100 in airline fees every card member year.  This pretty much includes anything charged to an airline other than airfare.  When I got the card there was hardly any information online about which purchases count as an airline purchase.

– My first test was a miles transfer fee with American Airlines.  The whole fee was reimbursed.

– For my second test I purchased a wi-fi connection on an overseas flight on American Airlines.  As I suspected, the purchase was charged to T-mobile, not the airline.  This was not reimbursed.

– My third test was an in-flight food and beverage purchase aboard an Air Canada flight.  This was not reimbursed and my statement showed the charge coming from a third party food vendor company.

Although in-flight purchases like meals and wi-fi may seem like it would count toward the airline charge reimbursement benefit, be careful to check whether or not it’s actually the airline charging you, or a partner company.  The primary way I have seen reported to take advantage of this benefit is to buy a gift card from an airline.  There have been some mixed reports of this method too, however, so do your homework before you make your purchase.  Flyertalk has a thread on the card, which contains many reports of using the airline benefit.

One last note on the airline benefit: for those who want to really maximize this card’s benefits, there are reports of people getting the $100 airline reimbursement, waiting until their anniversary date and getting another $100 reimbursement for their second year of card membership, and then cancelling the card before the annual fee posts.  Of course if you plan on keeping the card and paying the annual fee, you have a whole year to get the benefit again.

My experience with the Wells Fargo Propel World

My wife and I both applied for the Propel as the AMEX part of a “big 3” application round, along with Citi and Chase cards.  She was instantly approved and I got “pending.”  I called the next day and after some verifications, the rep approved the account.

The cards came about a week later in a some pretty nice packaging.  We each got an authorized user card for the other’s account to help coordinate hitting both bonus spends.  Around the time of the first payment due date, I was pleasantly surprised to find out about the 0% APR period, which I had failed to notice earlier.  These turned into our go-to cards when our cash flow was lagging, and we soon intentionally racked up balances that would sit there until the end of the promotional 0% period. 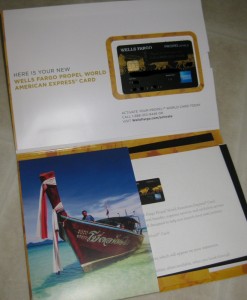 Near the end of our first year with the Propel, as the $175 annual fee loomed ahead, it was pretty easy to determine that keeping the card was not worth the fee.  Both of my attempts at using the incidental airline benefit on my card had failed (see above) so I wanted to capture the value of this benefit before closing the card.  A $100 American Airlines gift card did the trick.  I also used the rest of my orphan points on a Subway gift card, squeezing the last bit of value from this card.  Before the statement with my annual fee closes, I’m going to try and get another $100 AA gift card for my 2nd year airline benefit.

Nicoleen’s card already had a few airline mile transfer fees reimbursed and I was too lazy to check her statements to see how much was left of the $100 benefit.  Additionally, I had her statament closing date wrongly recorded and by the time she was going to call and cancel the card, her annual fee had posted to her account.  I discovered this while at work and I panicked, directing her to call right away and try to get the fee removed.  She did so, and only after I received the news did I realize I had forgotten to have her get a $100 airline gift card for the 2nd year reimbursement benefit.  Oh well…we missed out on a free $100 in airfare but still avoided the $175 annual fee.  And all that was on top of the $450+ in value we got from her card; so yeah…I can’t really complain 🙂

Should you get this card?

Yes.  Although Wells Fargo Rewards points are non-transferable and basically only worth the cash, $425 in points for a $3k spend is a good value any day of the week!  Add the airline benefit and a little extra spending and you’re up to a $650 value for getting this card.

So where would the Propel fit into an overall card strategy?  Of course that depends on your situation, but here are some things to consider:

– The bonus has been the same since this card’s inception so timing (vis a vis an elevated bonus offer)probably doesn’t matter
– All reports indicate your chances of being approved are higher after having some history with Wells Fargo.  A few months with a free checking account might do the trick.
– If your planned app round already has a Citi, Chase, and/or Barclay card, this could fit the AMEX role.
– If you know you’ll be paying for some miles transfers or purchases, having the incidental airline expense reimbursement benefit on this card can cover those costs, up to $100/year.
– If you currently don’t have a card that waives foreign transaction fees and you have international travel on your horizon, the Propel might be good to have.