After the delay at LHR we took a short bus ride to the tarmac to embark on the last leg of our flight itinerary.

This flight would take us to Euroairport (BSL/MLH/EAP), the strange airport with 3 different codes, on French soil, built by the Swiss.  Since British Airways short haul flights within Europe have 2 cabins, the ticketing code on our boarding pass for this leg was for business class; even though our entire booking was a first class award through American Airlines.  Intra-Europe business class with British Airways is called Club Europe.

Club Europe seats on this plane are standard size, but with the middle seat in the 3-3 configuration blocked off with a little table thing.  If you can’t get a bigger seat in the premium cabin, at least you get elbow room.  On our particular flight I think everyone in the front of the plane had their own 3 seat row to themselves. 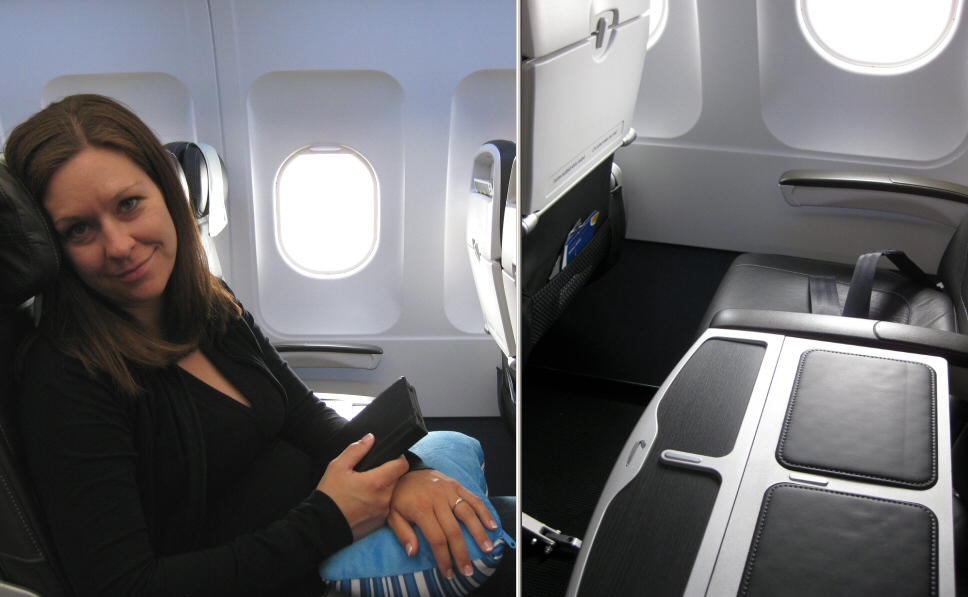 After we boarded, the mechanical delay continued for 20-30 minutes, but at last we got an explanation: The captain came across the PA and explained that the problem was due to a minor failure of the landing gear.  A non-critical failure had occurred on the plane’s previous flight and it needed to be checked out thoroughly.  The captain’s explanation and apology were so eloquent that Nicoleen and I both noticed it.  We joked that his speech almost made the ~4 hour delay worthwhile!

Our flight was just over an hour so we weren’t expecting a meal service.  We figured we might get some snacks at best.  Boy were we wrong!  The front cabin flight attendant came around and gave us a choice of a meat and cheese plate or a hot English breakfast.

I opted for the meat and cheese plate, which came with a roll, a yogurt parfait, and coffee.  I enjoyed it very much! 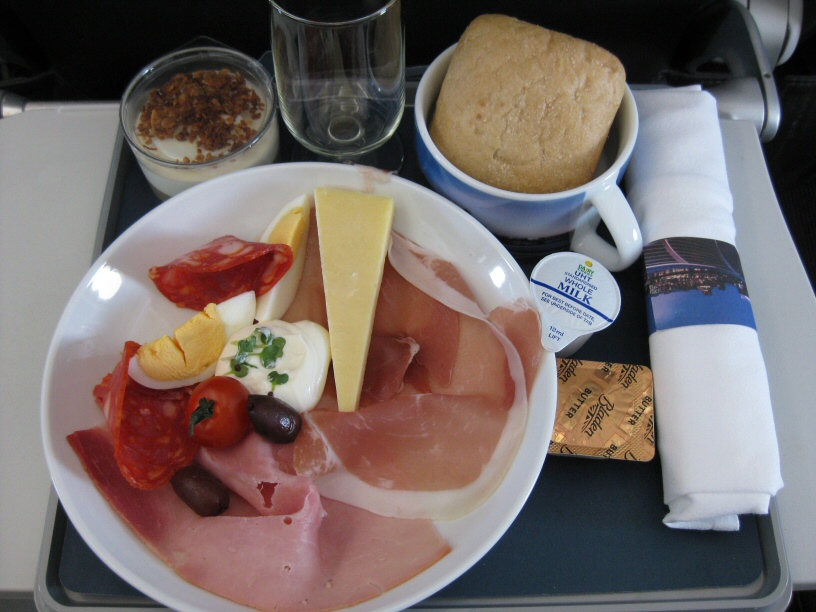 Nicoleen thought the eggs, croissant, and bacon described to her when she asked about the hot English breakfast sounded good.  What she didn’t expect were the mushrooms, fried tomato, and veal sausage.  I happily relieved her of her unwanted breakfast assortments.  Nicoleen enjoyed the eggs, fruit, and little jars of jam . . . but she was very offended at being served mushrooms for breakfast, and she somehow harbors negative memories of the delectable meal pictured here: 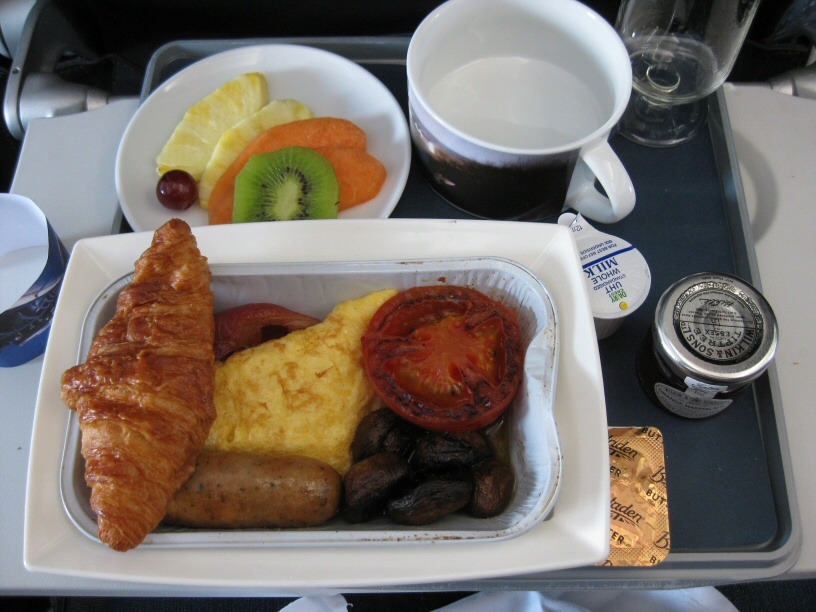 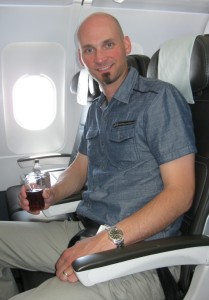 After the breakfast was concluded there was enough time to squeeze in a quick round of beverage requests.  As the culmination of over 24 hours of first class traveling, I couldn’t resist one last chance to avail myself of the rare and exciting, complimentary alcoholic beverage.

We really had no expectations for this short flight.  If anything, we figured the business class service would feel like a step down after 3 consecutive first class flights.  The fact that they managed to pack in a full meal service on our 1 hour 35 minute flight was enough to impress us.  The food quality, polite and attentive service, and thorough explanation of the delay sealed the deal.  An honest and believable apology by an airline employee goes a long way.  If not the highlight of our itinerary, this short Club Europe flight left us with a very positive impression of British Airways! 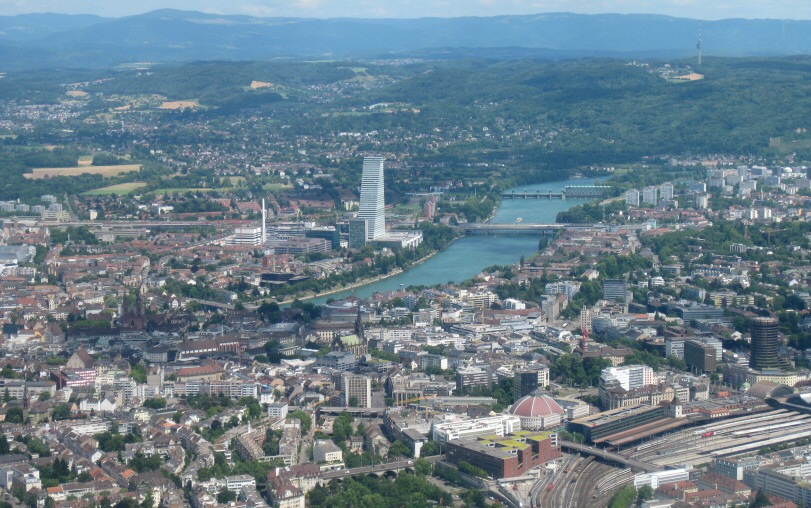 The approach to Basel. I was very excited to return to mainland Europe!

After our amazing transatlantic flight we had a 3 hour layover in overcast London before the short flight to our final destination, Basel.  Well, the layover was supposed to be 3 hours.  We ended up getting a slightly longer taste of the Galleries Lounge than we would have liked.  More on that later . . . 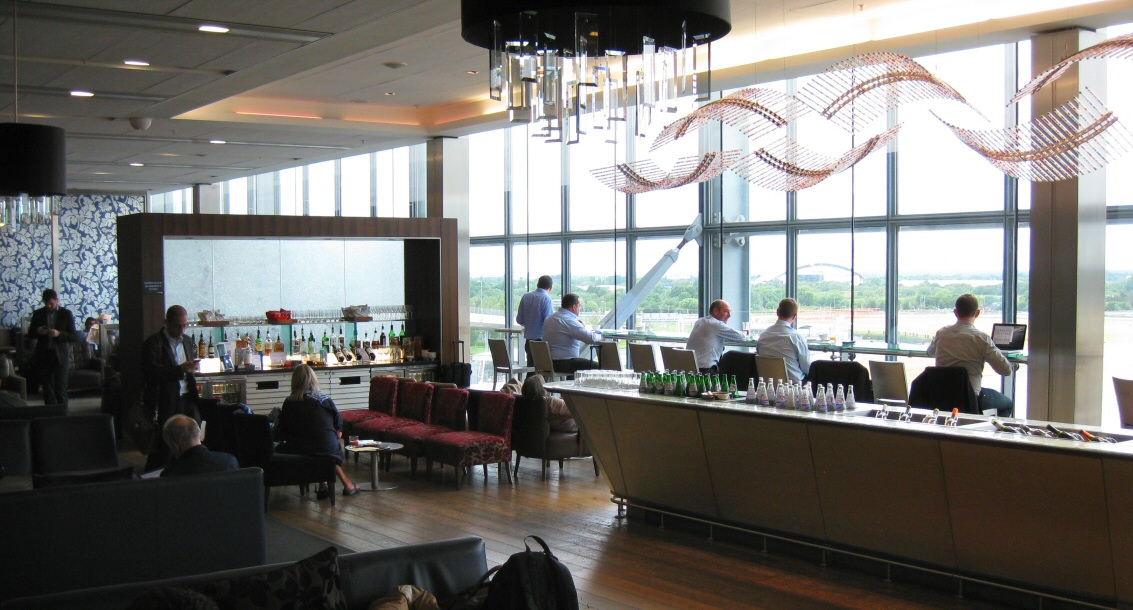 Galleries is the British Airways business class lounge.  I believe we would have had access to the Galleries First lounge as well, but we were a bit groggy this far into our 24+ hour itinerary and we saw the Galleries lounge first, so that’s where we settled in.  A quick check of our boarding passes gained us entry.  Neither Nicoleen nor I were interested in using the showers so we sought out a place to sit and set up shop.

London Heathrow airport houses two Galleries lounges in Terminal 5, and we were at the northern one.  Both were very busy when we arrived around 6:30 local time.  The lounge is located right next to the runway and it was fun to watch planes taking off and landing.  We found a little more free space “outside” on the mezzanine area, overlooking the concourse.  Our stomachs thought it was sometime after midnight, but I had declined breakfast on the long haul flight so I went in search of some food and drink.

There were some Danish type things over here:

But since I was finally in Europe I was looking for something savory for breakfast.  These little warm sandwiches fit the bill: 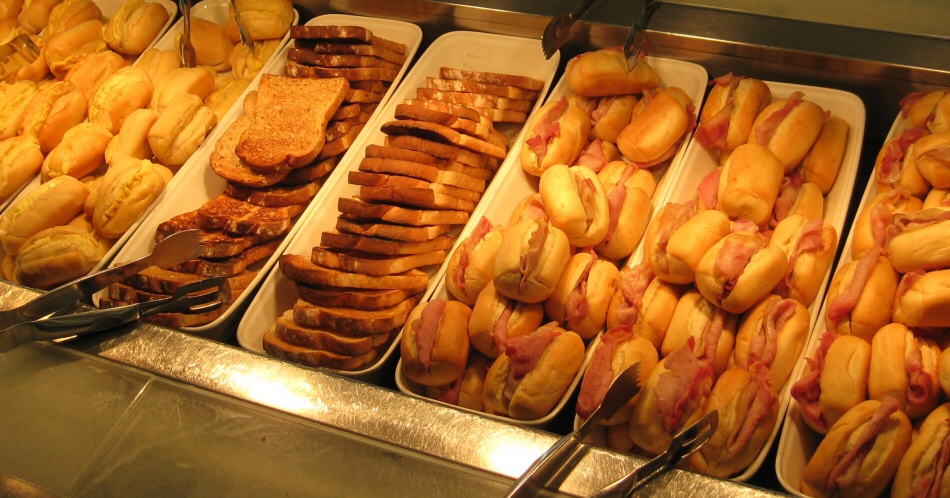 Some had ham and some had egg and melted cheese; both were delicious.

Because everybody loves drinking at 7:00 AM, they also had tons of booze available: 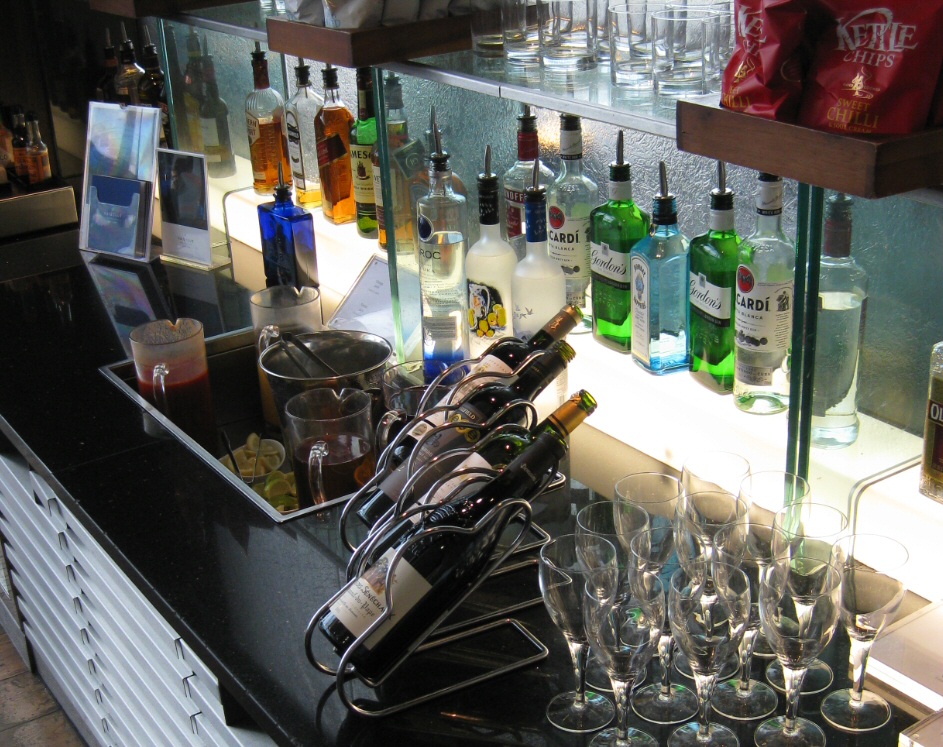 And in case your body was still on some vastly different time zone, you could dig into the wine and chips:

I always thought it was fish and chips . . .

Besides food and drink, Galleries lounge also provided a wide selection of magazines and newspapers.  Nicoleen and I had some good laughs reading the British tabloids and catching up on the scandalous lives of celebrities we had never heard of. 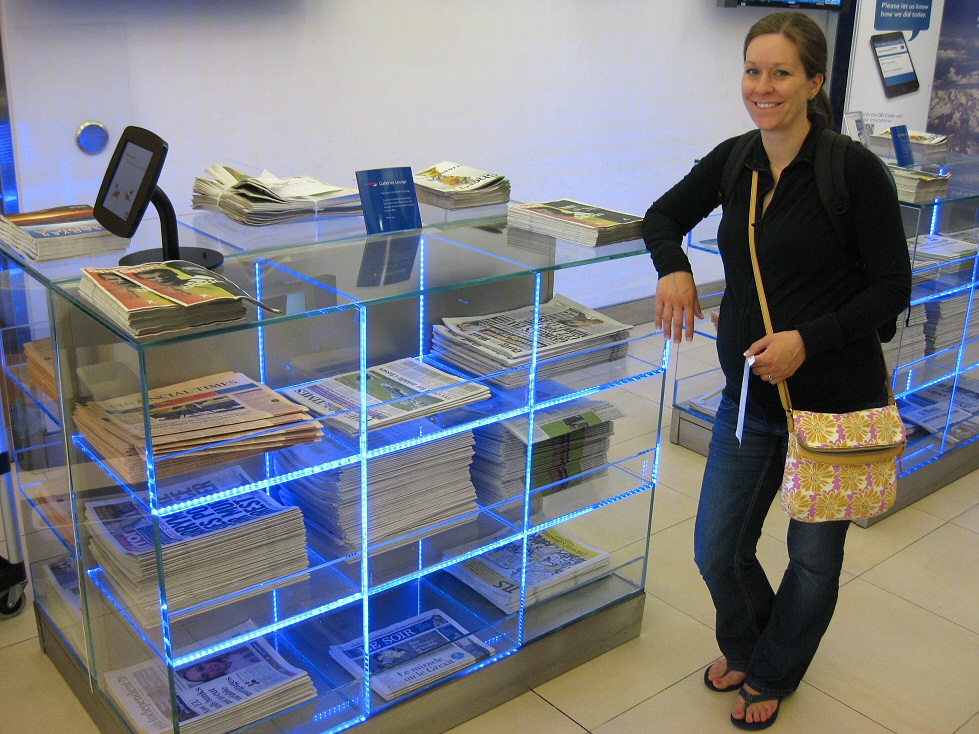 In Europe, even the magazine racks are futuristic and chic.

One negative thing I should mention is the bathrooms.  They were hot, small, plain, and their condition was borderline deplorable. Unless I was missing some other, hidden bathroom entrance, the only ones available were all single rooms.  Even the men needed to stand in line to get in!  Sorry ladies, we’re just not used to it 🙂

As our flight’s boarding time drew nearer, we threw an extra mini Diet Coke can and bag of Sweet Chili and Sour Cream kettle chips (they were so good!) into our backpacks* and walked down to the gate.

* Travel Tip: Take full advantage of complimentary snacks and beverages by stashing a spare in your backpack or purse.  Rarely will you get any dirty looks for doing so, and you’ll be glad you have the supplies if you end up stranded on a delayed flight, on a train with no dining car, etc.  Always be prepared.

The gate was actually a bus stop where we were to load a bus that would drive us to the tarmac for outside boarding.  On the board we noticed an unspecified delay was marked on our departure flight.  The gate attendant was unable to give us a time estimate.  Despite Nicoleen’s apprehension about me missing the flight, I decided to walk back up to the Galleries lounge and see if the desk agent therein could get me any better information.

After showing my boarding pass to gain entry, I walked up to the information desk and spoke with the agent about our delay.  As she was making some calls I noticed on the departures board that our flight number had changed, which worried me a little.  The agent was very helpful and discovered the nature of the delay: a mechanical problem.  She didn’t have a time estimate but she told me there was no imminent risk of boarding.  That’s the piece of information I was looking for; I could call Nicoleen and have her come back up to wait in the lounge.

I was unable to reach her on the phone so I walked down to the gate to rescue her from the growing line of people waiting for the bus.  We went back up to the Galleries lounge and I once again showed credentials at the door.  The desk agent told me in her charming London accent to stay close to the desk so she could advise me when I would be needed at the gate.  Nicoleen needed a nap by this time so she went out to the mezzanine and found a quiet(er) spot to snooze. 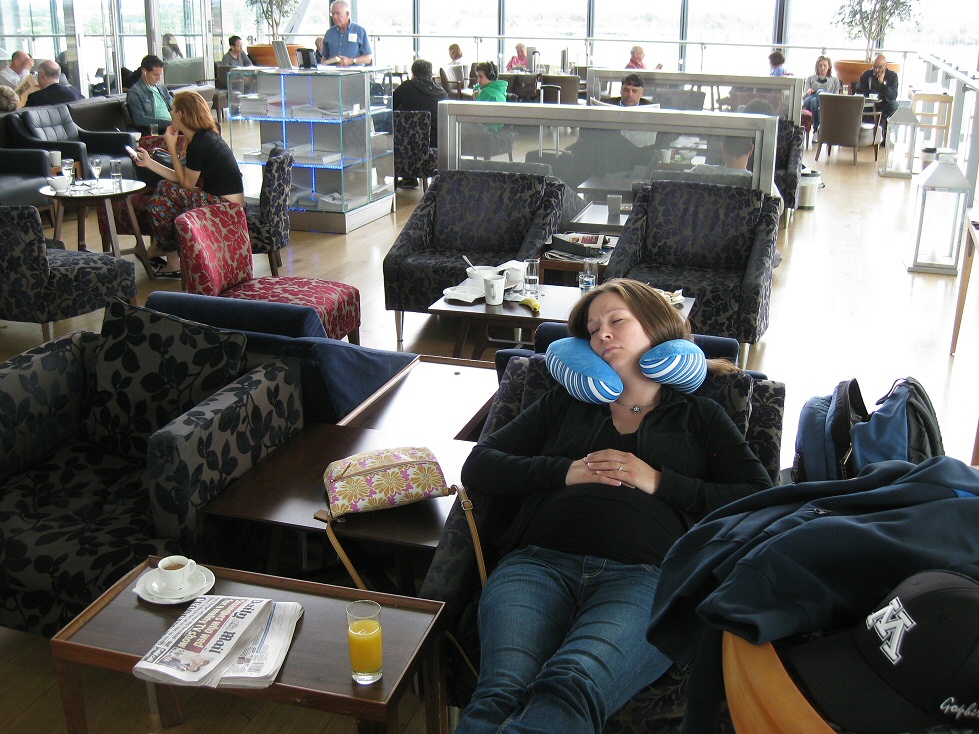 After I  had enjoyed another bag of Sweet Chili and Sour Cream chips and a couple very weakly mixed cocktails, the announcement for our boarding came over the PA.  I retrieved Nicoleen from her slumber, and we left the Galleries lounge behind to board our short flight to MLH/BSL/EAP (Euroairport).

For the official word on access rules, see the Oneworld Alliance lounge access page.  In a nutshell, any passenger connecting through or departing from LHR in a business or first class booking can use Galleries lounges.  The lounge access at this airport gets a bit more complicated because of the number of lounges (see this Lounge Buddy overview) and the special rules for the British Airways Concorde Room.  In fact, the latter has such a confusing set of conditions for access, there is a multipage thread on Flyertalk just for discussing the nuances.

Although Galleries is British Airways’ business class lounge, the food and beverage choices, amenities, and decor were on par with the first class Flagship Lounge we had visited in Chicago.  Reading other reviews, it seems like the packed house we experienced is pretty common at this lounge.  Despite the bathrooms and the crowd, we definitely relaxed more than we would have in the public areas of the terminal, so the lounge served its purpose.  The dedicated agent for lounge visitors also turned out to be quite helpful.