After revealing to Nicoleen that we had first class tickets by skipping the huge check-in and security lines at MSP (major wife points scored!), we had an unremarkable flight on an American Eagle regional jet to Chicago O’Hare (ORD).  Our itinerary had been readjusted a month prior to traveling, and we were now arriving in Chicago at 6:00 AM for a 6 hour layover.

Fortunately for us, our first class award booking granted us access to American’s Flagship lounge in Terminal 3.  The lounge opens at 6:00 and we arrived at 6:10, the day’s first customers.  This was especially nice for me because I was able to get a few pictures of the empty lounge with all the day’s consumables untouched. 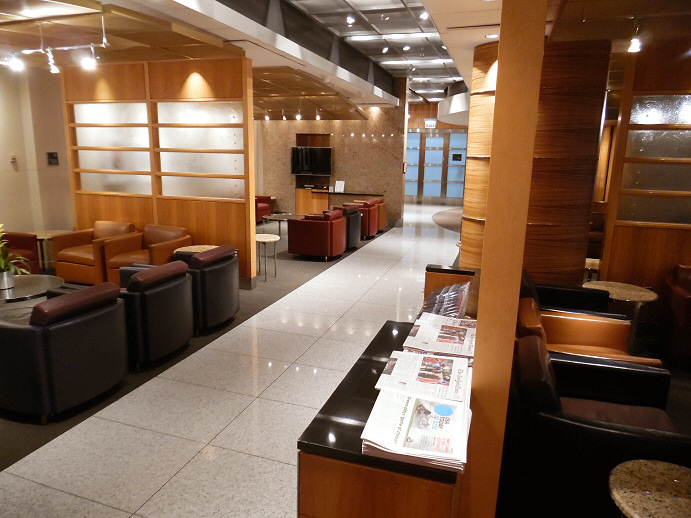 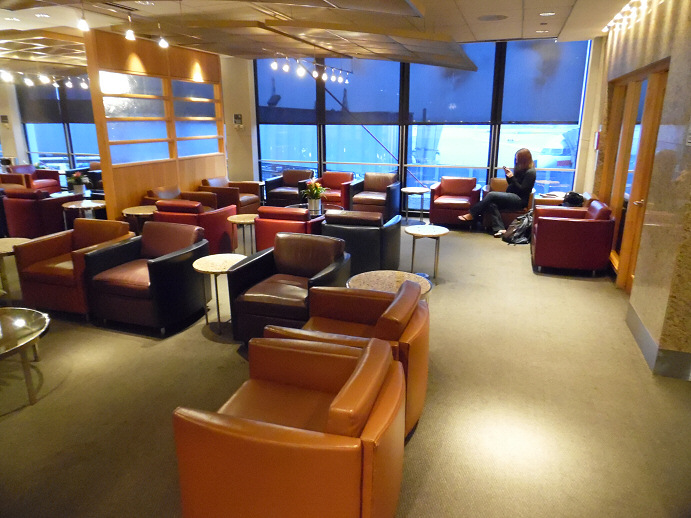 One of the seating areas

The beverage buffet, opposite the food buffet 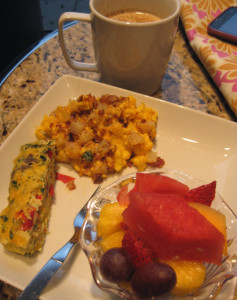 Breakfast in the Flagship lounge was an assortment of fruit cups and yogurt parfaits, hot pan quiche Florentine, and a scrambled egg/bacon/potato dish.  There was also the regular assortment of whole fruit, instant oatmeal, and cold cereal.  The coffee machine makes virtually anything you could want, and the full bar of juice, soft drinks, wine, beer, champagne, and hard alcohol is open the entire day, including breakfast time.

Eventually a few more travelers made their way into the lounge.  Nicoleen moved to a seat nearer an electrical outlet (somewhat hard to find) and I went to the business center to write a ValueTactics post.  The business center features private computer desks with granite counter tops and ethernet ports.  Several desks have computers available for use.  There is also a free printer available. 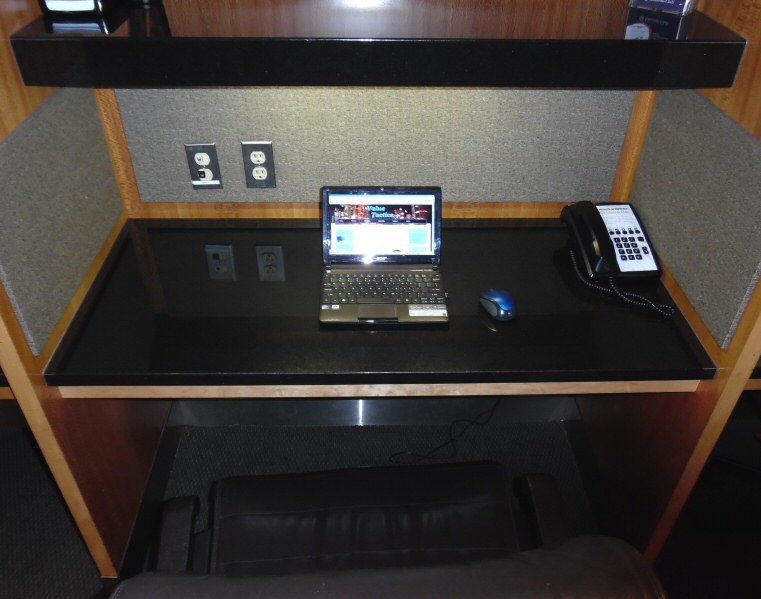 Shortly before noon the breakfast became gradually replaced with lunch.  The lunch consisted of a variety of pre-made sandwiches, several appetizers, and sushi rolls.  The shrimp cocktail and the hummus and pita appetizer were especially tasty, but the sandwiches were so-so.  All the lunch food was made better when washed down with a refreshing Amstel Light!  (They even had non-alcoholic O’Doules, although Nicoleen wasn’t in the mood for NA beer that early in the day). 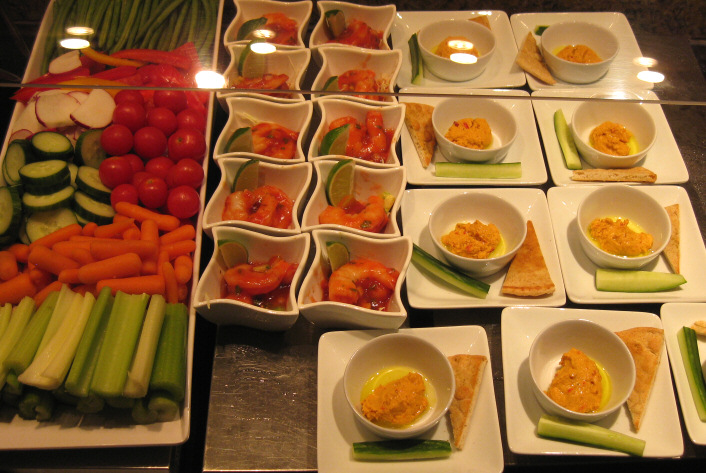 I can’t comment on the wine and champagne selection because my opinion would be pretty worthless.  I can tell the difference between an $8 bottle of wine and an $80 bottle; but I probably couldn’t tell the difference between a $40 and $80 bottle.  I’m just not that fancy.  I know beer a little bit better, and I was happy with the selection.  Besides the aforementioned Amstel Light, there was also Corona, Heineken, Samuel Adams, Sapporo, Guinness and several others.

The lounge eventually filled up, primarily with Asian travelers awaiting a flight to Beijing.  Even at the peak of the attendance while we were there the Flagship Lounge was never crowded.  The bathrooms were clean and tastefully decorated.  Besides the food, drink, and comfortable chairs, the lounge also provided major newspapers and had several TV viewing areas.

Access
To access American’s Flagship Lounge you’ll need to be traveling on a first class international flight with American or a oneworld partner airline, be a oneworld Emerald member, or have American Airlines AAdvantage platinum status and flying internationally.  It’s complicated and confusing, but it’s worth it to know the access rules well.  We were almost denied access because our last leg was in business class, until I pointed out to the desk lady that out long-haul flight was first class.  Here’s the link to the official American Airlines page outlining access rules.

Overall
AA’s Flagship Lounge at ORD was a great way to spend our 6 hour layover.  If I had to complain about anything it would be the slight dearth of outlets.  The food was fairly good (especially the breakfast), the chairs were comfy, and the layout provided a quiet, intimate atmosphere.  The unlimited beverages, including some decent booze, was definitely a plus (although common to most lounges) and would have been even more valuable has 50% of my party not been pregnant 🙂  Overall this lounge made our long layover enjoyable, started off our long itinerary in comfort, and generally exceeded my expectations.