Happy Labor Day!  This update is a few days late because I was enjoying the long weekend with my family.  Thank you for bearing with me; I know you were all anxiously checking the site for updates throughout the weekend.  🙂 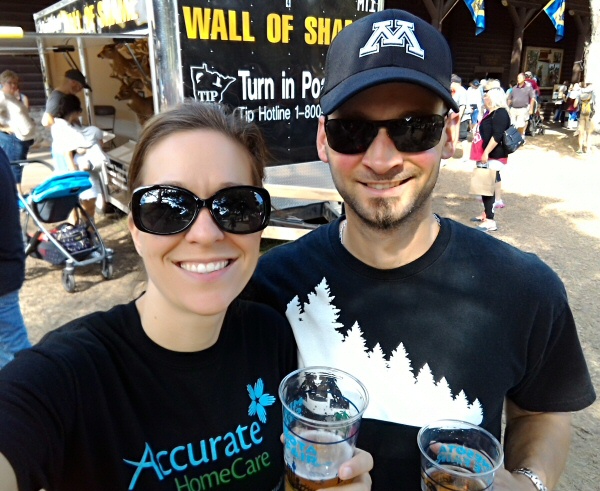 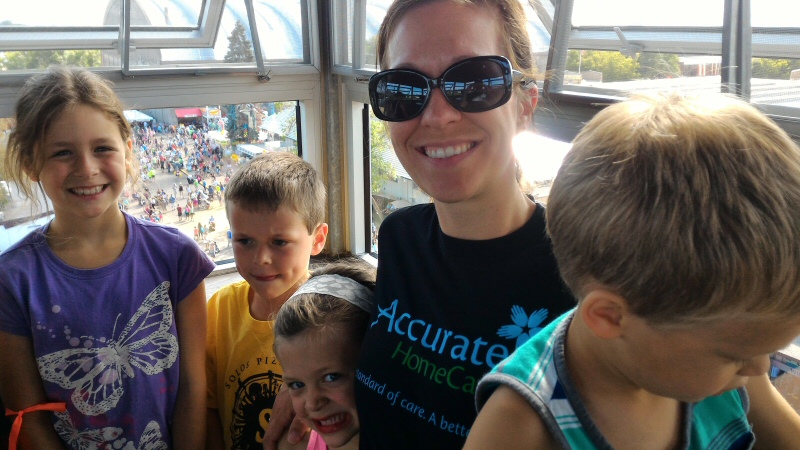 Enjoying a beautiful day at the MN State Fair 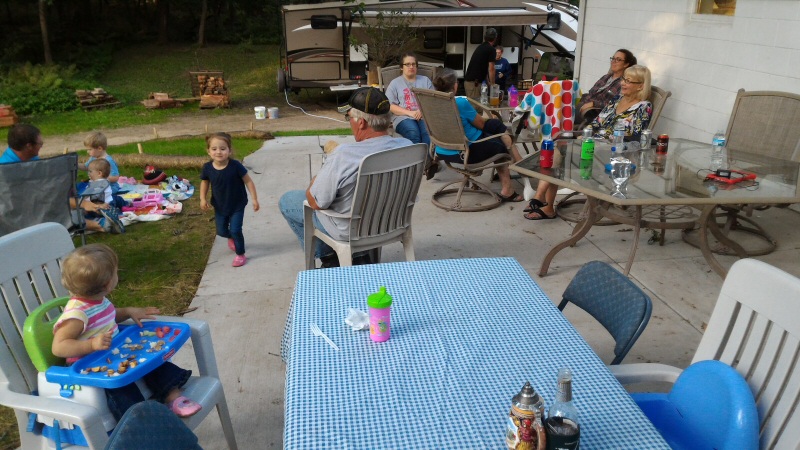 Camping with the extended family on Labor Day weekend. You can’t measure the value on that!

I recently came across this flyertalk thread by someone just starting out in this hobby. He wanted to know what kind of results can realistically be expected by using the credit card and points & miles tactics.  There’s a general sentiment on flyertalk that bloggers “sell a fantasy” when it comes to this hobby.  One thing I’ve always tried to do with ValueTactics is present my raw data so you can get a realistic picture of how this all works.  I am thinking about doing a whole post on this topic, but in the mean time…

Here is our points activity (transparent and unfiltered) for August:

Free Gas Update
As you will see in the new blog posts below, it was a big few weeks for the free gas tactic.  Super America’s announced the discontinuation of Double Coupon Tuesday, I discovered a new points earning tactic for My SA Rewards, and I redeemed my last ever $25.00 value gas coupon.

Since I started tracking my free gas results in January 2014, I have pumped $1,365.57 in free gas, largely by leveraging the double coupon redemption on Tuesdays.  My total discount on gas purchases in 2016 has been 20.6%!  These numbers will decrease in the future, but I will continue to use the tactics and maximize the value of whatever opportunities are around.

New ValueTactics Blog Posts
– The Man Who Earned 1.25 Million Miles . . . with Pudding is a tale of a legendary hero of points and miles.  If ValueTactics had a patron saint, the Pudding Guy would be him.
– The Free Cheese Stick Loophole is a bittersweet discovery I made that could have gotten me 56 free cheese sticks a week.  But I made the discovery just in time for the deal to become far less valuable.  Read the post to take a trip into my points-calculating mind. . . if you dare!
– Last Chance for Double Coupon Tuesday was last Tuesday, August 30th.  I really hope some of you with My SA Rewards points in your accounts heeded my warning and redeemed them in time to earn maximum value.

Website News
I updated the Free Gas tactical page to reflect the loss of Super America’s Double Coupon Tuesdays. I also moved around some of the sidebar elements on the site (affects mainly desktop users) to be more convenient and helpful.

Travel News
One week until our get-away to Hawaii!! Nicoleen and I couldn’t be more excited for this trip. It’s the culmination of 3 strategic credit card applications, some tactical flight and hotel bookings, and a masterpiece of child care planning (that last part all attributable to Nicoleen). It’s an interesting fall to travel to Hawaii, as the island chain recently had two rare near misses with hurricanes.

The leftovers of Hurricane Lester, seen northwest of Hawaii

Credit Card News
No big news on the personal front, but if you follow these things at all, you’ve read some of the hubbub surrounding the Chase Sapphire Reserve, the honey badger of credit cards, which was just released in the end of August.  I won’t even try to delve into the details of this card in this update, but I’ll do a post on it shortly.  In the meantime, you can just google it to see what the fuss is about.

I had back surgery yesterday to fix a herniated disc.  That’s my excuse for the lack of any work on the site or social media this last week.  Anything physical I wanted to get done for the next several months had to be finished before yesterday.  The surgery went well and now I’m on to the lengthy recovery process as I get back to normal.  I don’t want any pity so I won’t post the obligatory hospital gown/bed picture.  Instead, take a look at this hospital meal I custom ordered!

After not eating for 21 hours, this hospital food was better than any first class airplane meal or fancy airport lounge fare!

It was typical busy valuetactics week in our household.  Here are the highlights: With some limited commuting this week I only saved $5.43 using the free gas tactic.  That brings the running total for 2015 to $540, with the overall discount hovering around 17% for all my commuting gas needs. 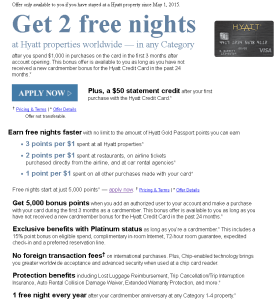 When we applied online for our Chase Hyatt cards a few weeks ago, I used an application link I found on the flyertalk wiki page for this card. There weren’t many reports of the direct link working. Instead, people had been getting this offer by starting to book a room and having the offer ad displayed for them. I couldn’t get that ad to display, so I clicked the direct link from the wiki. The offer was identical to the standard offer (two free night certificates for meeting a $1k spend in 3 months, plus 5,000 Hyatt Gold Passport reward points for adding an authorized user to the account) except that this offer also included a $50 statement credit.
When doing my monthly updates this week I discovered the $50 statement credits had posted to our accounts!  A free $100 for 5 minutes of research and clicking on the right application link!

Credit Card News
The sign-up bonus on the Chase Sapphire preferred has been jacked up to 50,000 Ultimate Rewards points.  By hitting the minimum spend (4k pts) and adding an authorized user (5k pts), you’ll have 59,000 Ultimate Rewards points!  Another $1k in spending or by making some of your bonus spend in 2x pioints categories, you’ll easily have 60,000 UR points! That’s enough for a free round trip flight to Europe in peak season if you transfer them to United miles, for example.  In the next few days I’ll be writing a post to outline why getting this card is a wise choice for several reasons.  Or if you’d like to apply right now, please use my referral link. (disclaimer: I earn bonus points when you click, but the offer is the same as the best public offer available.)

Ok, so once again a weekly update covers more than the last week.  But this time I had a good excuse for being late.  On Tuesday night Nicoleen gave birth to our 5th child, Leonie, a happy baby girl!  Good news for the family, but ouch! the gas savings really suffered this week as we didn’t have time to use our $25 Tuesday coupon while getting gas on the way to the hospital.  Oh well, you win some; you lose some.  And this time we won big with a good delivery, healthy mom, and cute baby girl! 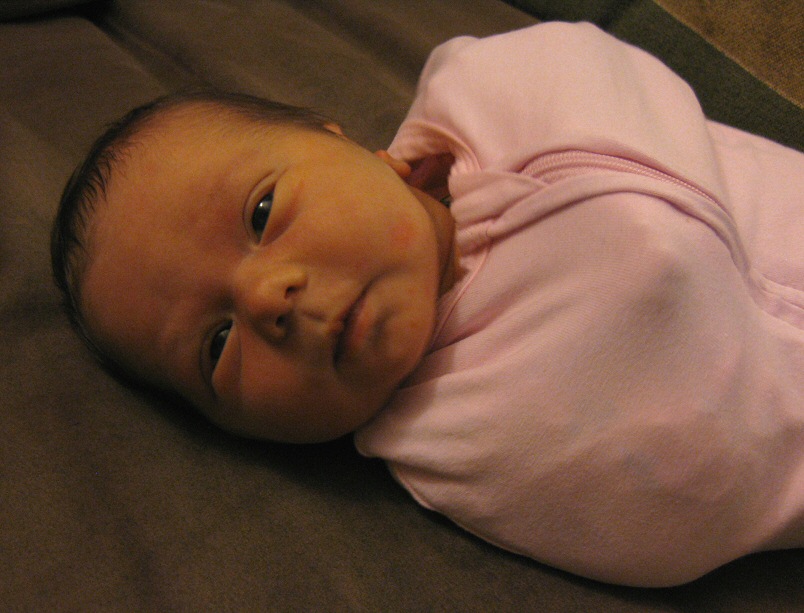 As it stands, I saved $9.55 in gas in the past week and a half.  On Sunday I overcame a huge test of my will power.  I was able to resist buying any free Menards stuff even though there was a major haul opportunity.  Three separate flyers listed free-after-rebate items at Menards, 2 of which are still active as of this writing: 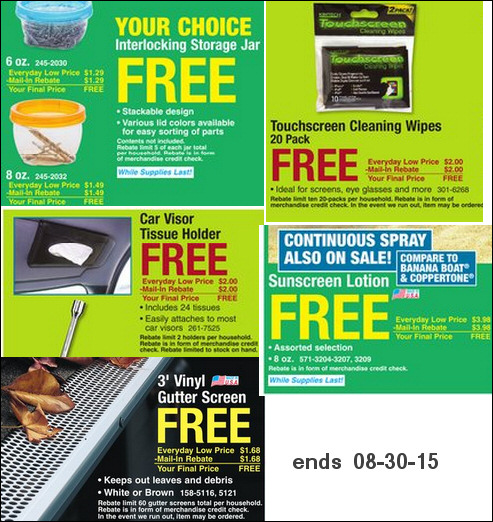 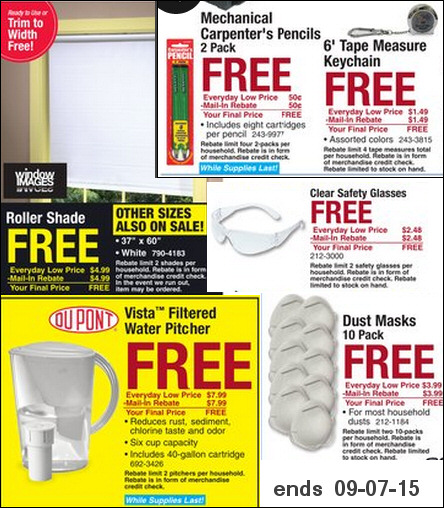 There are also several new ads starting tomorrow with free-after-rebate (FAR) items including: hats & t-shirts, cleaning supplies, coffee scoops, picture hanging kits, stick lighters, and American flags.  This late summer rally has disproved my hypothesis that FAR items are slowing down in Menards’ marketing strategy.  Of course you can always stay on top of current Menards ad flyers at their website.

It’s the spreadsheet-updating part of the month for me, and here’s our points and miles report:

New Posts this Week
– First Class to Europe – Anniversary Trip 2015 is the outline and table of contents of our summer trip reports from our anniversary trip.  Check back to this post for links to the trip reports for various parts of the vacation as I post them.
– American Airlines Flagship Lounge – Chicago (ORD) is a review of the first lounge we visited on our first class itinerary to Europe.  It was an awesome lounge, as I think you’ll see in this post!
– American Airlines First Class ORD – JFK is the review of the first class flight we took as part of our grueling (but free!) itinerary.

Credit Card News
We’re in sort of a stagnation period as far as cards go. It’s been a challenge deciding which card to use for what. I will almost certainly cancel my Wells Fargo Propel in October and I currently have 1300 or so Wells Fargo Reward points accumulated. The lowest redemption level for cash is $25 for 2500 points. So, do I put $600 in gas (2x points on gas station purchases = 1200 pts) on that card just for a $25 redemption? It doesn’t seem like a good deal, and it isn’t, but I also really hate having effectively unusable points balances just hanging there. The other option is to redeem points for mp3s at about 150 pts per download.

I got a targeted offer yesterday for the 50,000 mile Chase Southwest personal card, which I will likely not apply for at this time.

Nicoleen got a great offer in the mail a few days ago for her Barclay Aviator card which earns American Airlines miles. If she spends at least $500 in each month of September, October, and November, she’ll get an additional 15,000 bonus miles! That’s a deal we’ll definitely make sure we take advantage of.

Travel News
I have nothing on the books, and that’s very sad. I have a free weekend night certificate good at 99% of all Hilton properties in the world that expires December 20th. I was going to go with a friend for a sweet 36 hour mini-vacation to Chicago to stay at the $400+/night Waldorf Astoria but we’re still working out the details. If that doesn’t happen I’ll probably be taking a segment of my family to the Embassy Suites in St. Paul for a random weekend night. It’s not the Waldorf, but at least I’d be able to drink away my sorrow at not getting a more valuable certificate redemption at the Embassy Suites’ complimentary cocktail hour.