To celebrate our 10 year anniversary, Nicoleen and I took a trip to Europe in July.  The details were all kept as a surprise for Nicoleen.  In fact the trip’s existence was only revealed after our Jamaica trip back in February, which was itself an anniversary trip decoy.  This was the first major points/miles redemption that she got to directly enjoy, so I had put a lot of effort into making it awesome.  I wanted Nicoleen to see that all the card wrangling and miles managing was worth it! 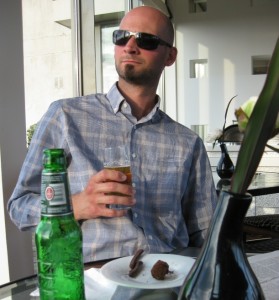 Our outgoing flight itinerary was booked with miles in first class.  Our return flight was also booked with miles (but in economy).  We enjoyed amenity-rich airport lounges, got to lie flat on our transatlantic flight, stayed on the executive floor of a Hilton hotel for free, and avoided all foreign transaction fees.  And of course the entire time we were earning more points and miles toward our next trip.

The basic outline is as follows:

Each section of our trip will be reviewed in a separate post.  Click the links below to view each part:
(Links won’t be enabled until a given post is published.)

One thought on “First Class to Europe – Anniversary Trip 2015”