Earlier this summer, as I mentioned in the June 16 weekly update, I hauled my empire of acquired stuff to Swappers’ Meet flea market in Wright County, MN.  The goals were to reduce volume and make some profit.  I had some random items to sell, including the balls and pumps mentioned in a previous post, but the majority of my wares were the fruits of my Menards free stuff tactic. 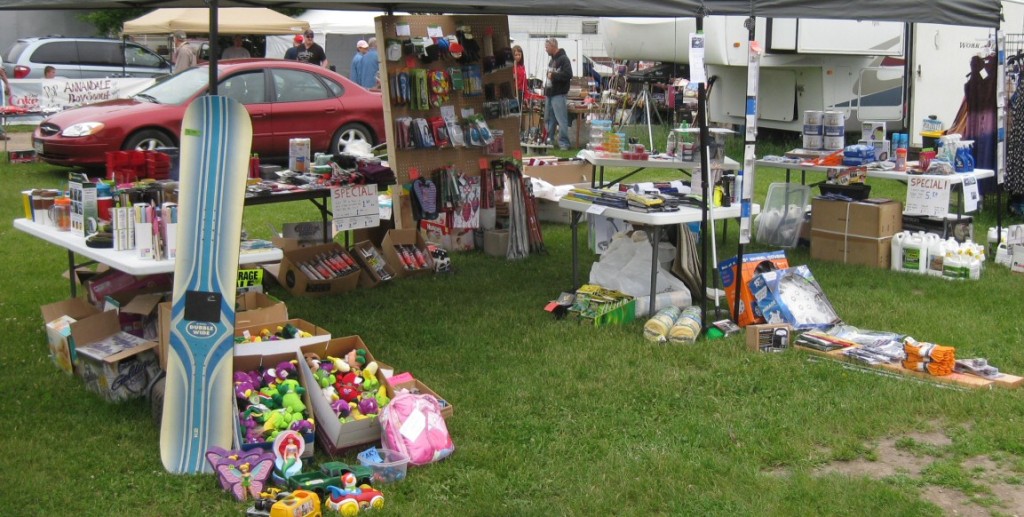 Our display tables at the flea market. 90% of the items for sale were Menards free-after-rebate items.

Over the previous two years I had bought about $5000 worth of free-after-rebate items from Menards.  Of course the “street value” is quite a bit lower.  I priced most of the items at 20-50% of retail value.  My philosophy on second-hand pricing is to try to find the sweet spot where it’s high enough to make it worth my while, but where it’s low enough where price is basically eliminated as a factor in a buyer’s thought process.  To give you an idea on how much stuff I had up for sale, my dad’s Chevy Tahoe, a 4X8′ trailer, and the bed of my friend’s truck were all packed full.

Swappers’ Meet is one of the biggest flea markets within easy driving distance and is open Saturdays during the summer.  I had only been to a few flea markets before this, so I did a lot of research online to make sure I didn’t break any rules, got their on time, got a good spot, etc.  We got there at sundown on Friday (July 14) and found what seemed to be a good spot right across from one of the permanent food buildings.  Apparently the regulars can get fussy if newbies like us “steal their spot,” but we never encountered anyone hostile.

We set up two 12×12′ canopies and half a dozen tables and started unboxing our items.  Since a lot of my stuff was new, in box, and from a retail store, having a pegboard to hang the packages on was a great way to display several items in a small amount of floor space.  Lesson learned: next time have more pegboards. 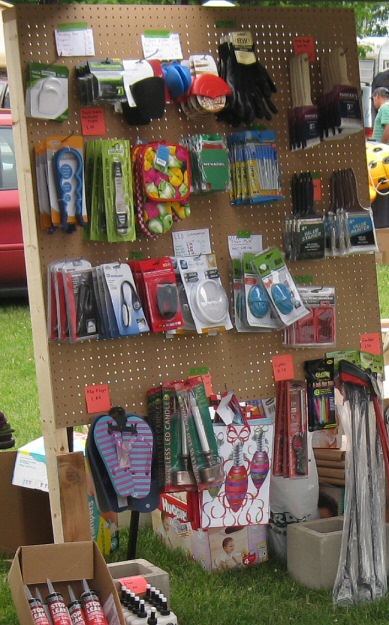 We continued to set up for half the night, and tried to get 2-3 hours of fitful sleep in the back of our respective vehicles.  As soon as the sky began to lighten, cars started rolling in and early shoppers started perusing our mostly-set-up spread.  As the morning wore on, it got busier and busier.  We didn’t inflate one of the giant soccer balls until a little before noon.  Having something so huge and unusual out there really helped draw people in.  There were customers who probably wouldn’t have even stopped by if they hadn’t noticed the soccer ball. We also didn’t sell a single ball or pump until we had the display one inflated and up front.  Lesson learned: put unusual or interesting items up front to draw people in.

It seemed like a busy day to me but according to some others we talked to it was a relatively slow Saturday.  Things really started winding down around 2:00 pm and most vendors were packed up and gone by 4:00.  We did $295.70 in total revenue, with the following breakdown:

The entrance fee was $15, which we split proportionately among all of the above-listed categories.  Because our revenue was almost $300, I consider the fee almost negligible.

As far as what sold well: some of my predictions were correct and some were wrong.  I rightly guessed that the kitchen supplies and plastic tumblers would sell well.  I thought more of the hand tools and LED lights would sell.  The paint brushes were popular as expected, but I sold almost no 3″ brushes and almost sold out of the 2″ angle brushes (opposite of how I had stocked up).  I was pleasantly surprised that I sold a few gallon jugs of deck wash, but I sold none of the driveway degreaser jugs.  Of course all of the American flags sold 🙂

All said I offloaded 6 boxes of stuff.  Not a huge volume reduction but a welcome one.  I consider the flea market a moderate success.  If there was no setup or tear-down involved, and I could simply drive out there every Saturday and start selling, it would definitely be a worthwhile method to get the Menards stuff sold.  As it stands though, with the effort of moving/unpacking/packing up all the merchandise, it’s probably not a very efficient use of time.  More analysis on this will be forthcoming when I write my Menards experiment analysis.

One thought on “Flea Market Round Up”