A few nights ago I had an AOR (app-o-rama) and applied for 3 cards, including the Marriott Rewards Premier from Chase.  Unless something changes in Chase’s 5/24 policy, this may be my final Chase application for the rest of my credit card career.  As I discussed in this post, the policy says that if you have 5 or more new card applications (from any card issuer – not just with Chase) in the past 24 months, you will be summarily denied on any Chase application.

I have opened 9 new credit cards in the past 24 months, so I’m well beyond the 5/24 limit.  But the rule goes into effect for Chase co-branded cards some time this month (April), and I applied for the Marriott card on March 31st.  I didn’t particularly want this card but I figured it was my last chance to get any Chase card for the foreseeable future, so I picked the best current promotion that I was eligible for and gave it a shot.

My philosophy is to never apply for just one card so I shopped around for the best current promotions at other banks that I was eligible for, and here’s what I came up with:

And here’s how the applications went: 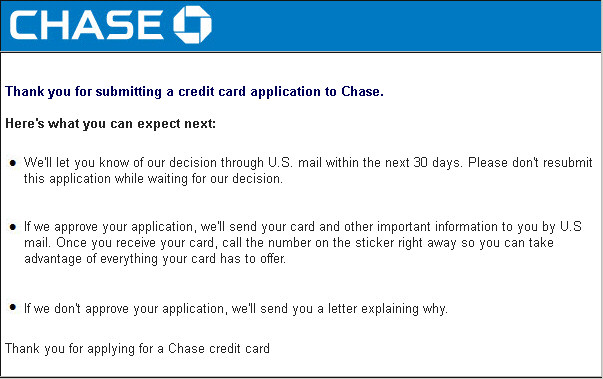 Two out of three instant approvals at this stage in my card career isn’t bad!  If I end up getting denied for the Chase Marriott Rewards Premier it will be very interesting to see what the reason is.  Will the 5/24 rule be applied when the application is reviewed even though the application occurred in March?  When exactly in April will the rule go into effect?  Well, for my sake I hope these remain a mystery because I want to be approved 🙂

No matter what the result of the Chase application I have some serious spending requirements to meet in the next three months.  If I have to get creative it will probably be a good time to write an article or two on how to meet minimum spends.  As always, I’ll keep you posted…