A week ago Nicoleen was warned by the manager of our local SuperAmerica that double coupon Tuesdays would be discontinued at the end of this month.  Yesterday, at another SuperAmerica station, I confirmed this rumor when I saw this sign at the pump: 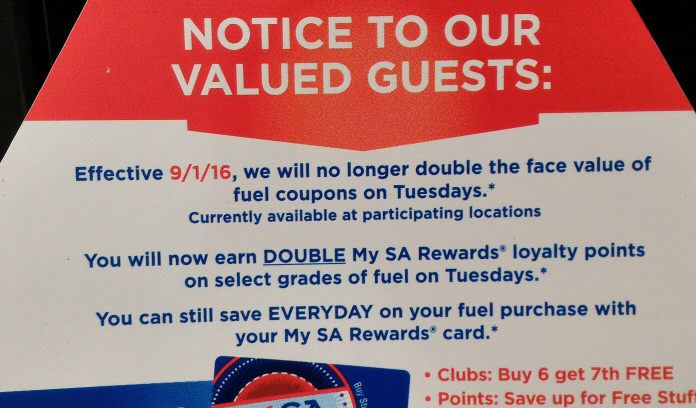 Double coupon Tuesday has been the bread and butter of our free gas tactics for the past several years.  The policy would double the fuel discount on any coupon (even competitors’ coupons), every Tuesday.  As I explain on the free gas page, this allowed me to trade in points for a $0.50/gal coupon every couple of weeks, use it on a Tuesday (making it a $1.00/gal coupon), and redeem it for the maximum 25 gallons to get $25 in free gas! 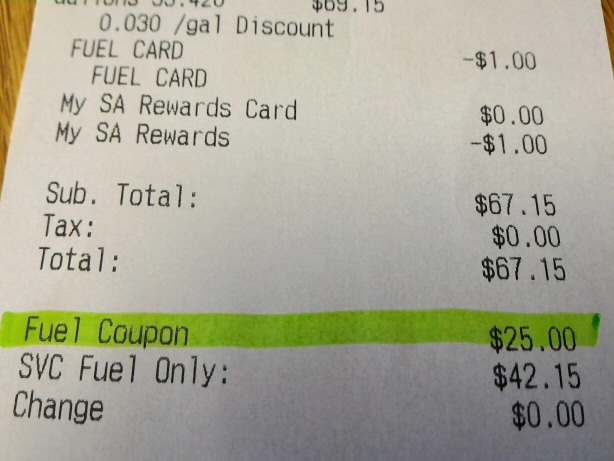 With this and other tactics, I have received an average yearly discount of 13-19% on all gas purchases since I began tracking them.  I am currently sitting at just over 19% for 2016.

How much will this hurt the free gas tactic?

It will hurt it a lot.  The following chart shows the breakdown of where my gas savings comes from (data from January 2014 to current): 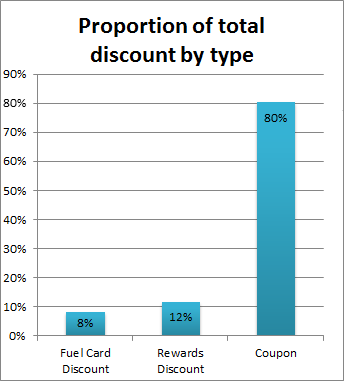 I didn’t calculate the proportion of the coupon savings that was derived from doubling the coupons on Tuesdays, but a glance at my discount tracking data makes it pretty obvious that the double coupon Tuesdays make up a sizable percentage: 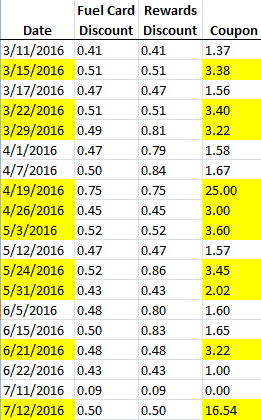 As you can see, most of the coupon savings comes from Tuesdays.  And the majority of the Tuesday savings comes from the big $0.50/gal coupon redeemed as $1.00/gal coupon.  It takes 8750 My SA Rewards points to buy this coupon, which makes the points worth about $2.86 per thousand.  Obviously you would never want to trade in points to use this coupon any day other than a Tuesday.  After this change in policy, My SA Rewards points will only be $1.43 per thousand when used on the gas coupon.

What to do now?

Like everything else related to the ValueTactical arts, we are at the mercy of the whims of the program administrators, banks, airlines, and hotel chains.  Programs change all the time.  Instead of getting down about it we need to simply adapt and find the best way to maximize whatever opportunities are out there at this moment!